I missed the Tune-yards when they performed at the Troubadour this July. The show was sold out, and I was not clued in yet to the complex rituals of obtaining second-hand tickets to LA concerts. Thankfully, Merrill Garbus was back in town four months later, and last Wednesday, I found myself part of the pandemonium that accompanied her Music Box performance.

Seriously, I run out of superlatives.

Picture this. Two opening sets have come and gone. The first, Pat Jordache – and what appeared to be four of his family members accompanying him on instruments, always interesting to see family bands together – had catchy hooks and a very disquieting vocal palette. (Track of note: ‘Phantom Limbs’) The second was turntablist Cut Chemist, previously known for his work with DJ Shadow and Ozomatli, who got everyone grooving to his percussion-hopping, genre-squishing vinyl shenanigans. And then Merrill comes on stage, wearing a purple dress with green papier-machey necklace and a cheerful smile that appears completely at odds with the warpaint on her face. She closes her eyes briefly, and then launches into a 3-minute vocal outburst that is part yodel, part gutteral wail, part ritualistic war-cry. The crowd roars with her. She finishes , the band has slid into positions, and they launch into the thumping ‘My Country’. The song is a propulsive, celebratory melody that made me want to run around the house, shrieking with glee, when I first heard it early this year. Hearing it live makes me grin like a maniac and frantically try record it on the phone. The band clangs on pans and utensils to get the chaotic feel of the song just right, Merrill’s voice is powerful enough to make chandeliers sway and hair stand on end. The synth line comes in, I give up futile attempts to record for posterity and just give myself up to the music.

Merrill, on stage, is funny, whimsical and so totally at ease with the complicated loops she creates on the fly, multi-layered textures of her voice for different phrases in the songs. She switches between drumsticks and a ukelele – the second ukelele performance I had seen that week, more on that later. Some of the drum loops – especially the bass thumps – are pre-programmed (I think), with the fill-ins layered by her live, and at times she even hits her microphone stand to get the right sound. The other musicians include a bassist and occasional knob-twiddler, and a saxophonist and a trumpeteer. Nothing fancy, but the overall effect is one of an insanely well-coordinated outfit that knows how to gut-punch the crowd.

Cut Chemist comes out again, joining the band on ‘Gangsta’, overlaying the song – already a catchy number – with a delicious scratch-track. Pure fucking magic. One of the best concerts I’ve seen so far, and I’ve seen pretty great bands this year. When the Tune-yards are coming back to LA – and they most definitely are – I am going again. Yes, it’s that good a band. 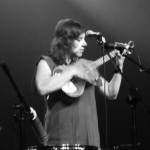 Merrill on the Ukelele

There’s this thing I’ve noticed about live shows. The music on the sound system before the show is due to begin has nothing in common with the musical sensibility or genre of the band you’ve come to listen to. Sometimes I get the feeling that sound engineers at concerts, much like quiz-masters and bloggers, are very concerned about broadcasting their taste to the audience at large. Like, hey, I know you guys’ve heard this band and shit, but you are going to like this band more, because I said so. At the James Blake concert, the DJ played a bunch of dance music, while the person operating the sound system at the Portishead concert day before yesterday seemed to have a reggae hangover. We stood around for about 55 minutes listening to a playlist that, in the immortal words of B Stinson, went heavy on the  “mm hm chaka mm hm chaka” bassline. Ah, who’s “we”, you ask? I happened to run into old pal Richard and his fiancee at the Shrine. Tuning out the reggaethon going on in the background, we spent much of those minutes catching up – by which I mean we talked nineteen to the dozen about comics, movies and TV shows. Good times.

I had gotten my tickets to the concert just a day ago, thanks to a Craigslist samaritan who wanted to sell her extra ticket for cover price. (Yes, weep with envy, people, CL-trolling does have its virtues) I did not even know there was an opening band, but as soon as the three-member group began to play, I was struck by the Indian/middle-eastern sound, the glissandos, in particular. Echoey, spaced-out guitars that transformed into wall-of-noise level sonic mayhem, wailing vocals-sans-words that reminded me of Peter Gabriel’s Last Temptation of Christ soundtrack. It was because of this overly-familiar air that I did not enjoy the band as much, just seemed a little too predictable for my taste. Turned out their name was Thought Forms, and sure enough, the band does have Indo-credentials – the lead guitarist is a lady named Deej Dhaliwal.

When Portishead finally took the stage, at 9:30 PM, we had been standing around for almost 2 hours. The band launched into ‘Silence’, from their third album, and over the next hour and a half, they systematically managed to reduce me to a gibbering wreck that would have uncomplainingly waited for 2 hours more. Yup, that good.

Beth Gibbons, onstage, was totally into it. She hardly spoke anything between songs, and uttered maybe two or three sentences in course of the show. She wasn’t there for the audience, she hardly acknowledged the applause and the cheering crowd. Everytime there was an instrumental solo, she would face away and sort of tense her body, like she was using the music to recharge her vocal chords. When she sang, she crinkled her eyes shut and shook her head from side to side, in time with the beat. Her voice, oh dear lord, her raw, unprocessed, haunting voice gave me goose-pimples. It was only at the end of the final song ‘We Carry On’, when the rest of the band went apeshit with their musical denouement, that Gibbons unwound visibly, stepping down from the stage and reaching out to fans in the front row.

As a band, Portishead is fucking flawless. Not a single note strayed from the recorded version. Even the scratching was perfect. To me, this was a bit of a disappointment – a live show is meant to be about improvisation and reinterpretation just as much as about fidelity. However, a lot of the experience was enhanced by the video wall at the back, where swirling shapes and abstract patterns merged with a live video feed of the band’s performance. This was not just generic concert shots, this was footage taken from different stationary cameras placed strategically on the stage, spliced together and overlaid with filters. This resulted in strange and somewhat disconcerting visual effects – like a shot of the bass drum pedal dissolving to bassist Jim Barr’s fingers on the frets, overlaid with face-melting shots of Gibbons’ singing. Digital video is the future, people, it seems to have rendered recreational hallucinatory drugs redundant.

The set-list was a ‘best-of’ mix from all the three albums and also included the new single ‘Chase the Tear’. Seemed like the only two songs where the video was replaced by generic concert lights were ‘Glory Box’ and ‘Sour Times’, the most well-known of the band’s discography. My personal high-point was the track ‘Machine Gun’. The song is all staccato beat and aggression, and Gibbons’ voice possesses an ethereal wispiness that counterbalances that aggression, especially with a reedy, multi-tracked wail that percolates in the background. It builds up to an anthemic synth lead solo, which they totally totally nailed live.

A few words about the Shrine Expo center, the venue of the concert. Apparently it’s next to the Shrine auditorium, which was a Grammy and Oscar venue in the 80s and 90s, before the newly designed Nokia and Staples centers took over. Before that, the auditorium was also a temple devoted to a Freemasonry spin-off body called the Shriners, short for The Ancient Arabic Order of the Nobles of the Mystic Shrine. As I slumped in my seat in the bus back home, gaping at the Wikipedia link, it crossed my mind that there was an Alan Moore story hidden somewhere in the history of that auditorium, waiting to be released. But it was past midnight, and I safely put that thought to rest.