Netflix’s Daredevil was one of my favorite TV shows last year. It may possibly have been one of my favorite comic-book adaptations ever, especially at a time when my tolerance towards comic-book adaptations is running pretty thin. I made the show last for a whole month, watching it as slowly as I could, loving nearly every minute of it. Netflix then followed it up with Jessica Jones in the later half of the year, and by then my forbearance was at an end. I binged on it over a weekend, and came up for air after with a grin on my face.

The next season of Daredevil is due middle of March, and I have to admit that despite my pop-culture-jaded exterior, I am pretty damn excited about it. But what is really making me giggly is noting the Renaissance art references in the season posters. Not just because I like the old masters, but because it takes a very special kind of marketing team to pay attention to a campaign like this. Daredevil is a series that draws from the character’s Catholic upbringing – hey, the first scene in the series begins at the confessional altar in a church – and it makes sense to use elements of paintings to advertise the series.

Up first were the cast posters, both of which were inspired by Michaelangelo paintings in the Sistine Chapel. Michaelangelo – The ceiling of the Sistine Chapel The next few posters have been character-oriented, and wear their baroque origins on their sleeves. Case in point, both Karen Page and The Punisher’s posters were inspired by Caravaggio paintings, while DD’s is influenced by Rubens’s St Sebastian. 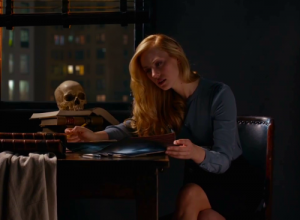 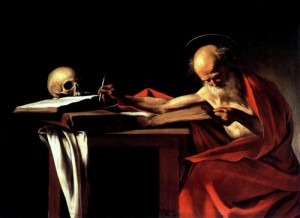 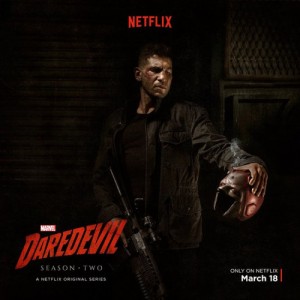 Jon Bernthal as the Punisher 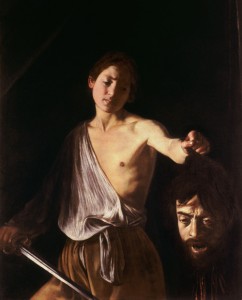 Caravaggio – David with the Head of Goliath 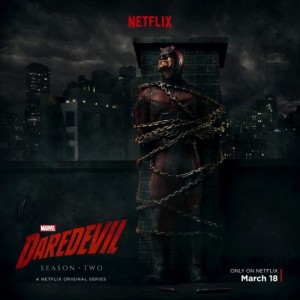 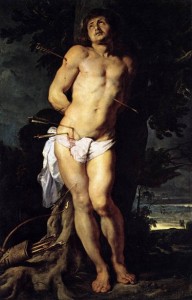 But as fun as the referencing is, I will admit that the posters do look a little strangely-designed if you do not know the antecedents of each one. And that explains why fandom is screaming about Photoshop and bad design about each of these posters.

What do I think about the second season? Well, I am not a big fan of the HighlyVisibleNinja trope in American popular culture, in which ninjas are dumb fight-fodder a step above zombies. I liked the way the supernatural elements dripped slowly into the world established by the TV show, in the first season. It made sense that one of the most grueling fight scenes in the season was between Matt and Nobu, and that was a serious boss-fight. Now that the Hand has officially made their way into the story-line, it’s but inevitable that the fight-scenes become generic martial arts sequences. I am also concerned about the fact that Drew Goddard is no longer headlining the crew, and that Jeph Loeb is still around as head of Marvel’s TV division.

The other, more important reason why I am a little cautious about the show is what I like to call the natural entropy of a superhero story based on an existing property. Where there’s the urge to throw every knuckle-headed reference to events related or unrelated to the main story-line, just to acknowledge to the viewership that hey, yeah, we know, and you know, and we know that you know, and isn’t life dandy. The creative team in Daredevil has been remarkable in their restraint so far; the first reference to Elektra last year was part of a long conversation about learning Punjabi that nearly got me belly-laughing, and the use of the line “give me a red” came out of nowhere, not only establishing a secondary character’s future reappearance, but also the eventuality that Born Again is in the cards. I like subtle references that way. It will get annoying though – yes, “will” because I am asking to be contradicted – when there is the necessity to shoehorn the Defenders universe eventually, and fit it into the bigger Marvel Cinematic Universe. What bothers me about this is the fact that it robs a story of an ending. The best stories are the ones that end. Always.