I nearly did not make it to San Diego Comic Con this year. Blame it on jet-lag, middle age and a perilous meeting-packed week. I knew I would not make it on Wednesday and Thursday, and by the time Friday came around, I had half a mind not to go at all. But there were promises to keep.

I believe I am coming down with Convention Fatigue. I say this out loud despite knowing that fifteen-year-old version of me would punch me in the face. 2005-version of me would get all passive-aggressive, especially at how I was somewhat behind in replacing all my shelved books with signed copies.

This is specially true of San Diego, where walking from one end of the exhibition floor to the other requires serious stamina, a willingness to not mind being buffeted by the occasional 200-pound metaphorical gorilla. I am not making fun of the Comic-Book Fan here, I swear, it’s just that there is never a straight line. There are always aisles blocked by a signing, or impromptu photography sessions when an exceptionally-beautiful Elektra poses for pictures, or a kid wants to pet a cute R2D2 robot. Occasionally you notice that specific creator signing at a booth, and you have to weigh the probability of missing the event you are running to if you choose to queue for this particular guy, who is only around for 30 minutes more and does not stay the next day. 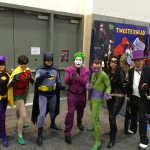 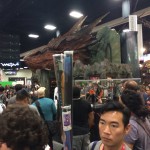 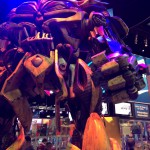 San Diego Comic-Con is a logistical nightmare if you are not prepared. I was not prepared at all this year.

I missed Benoit Peeters and Francois Schuiten signing the new English language reprints of their award-winning graphic novel, Leaning Girl. I could not get to Joe Hill at the Harper Collins booth because he signed until noon on Saturday, and I got there at 12:10. I could not get to Joe Hill at the IDW booth because you needed wristbands (groan!) to stand in line, and all the wristbands got over in the morning. I missed Bryan Lee O’Malley signing at his booth because I wasn’t there on Thursday and he cancelled his Saturday signing. Missed Matt Kindt and Kazu Kibuishi; did not even get to say hello to Mike Mignola at his booth, wanted to get a ticket for the Sin City 2 signing at the Dark Horse booth but could not.

“So what did you do in the one and a half days you were there?”, they asked.

My favorite moment in the show was meeting artist Kevin O’Neill, who was signing and sketching over at the Top Shelf Booth. I was in line on both days, and got a Mina sketch and a Hyde sketch in my Absolute League of Extraordinary Gentlemen editions. Got my Marshal Law and Nemesis The Warlock volumes signed, and even bought a limited edition copy of League: Century, signed by both Alan Moore and Kevin. While waiting in line, it turned out that pal Micah was right behind me, and we spent a pleasant half-hour talking about con experiences and comics. With a special emphasis on the phrase “Hyde fucking the Invisible Man to death.” What have you wrought, Alan Moore? 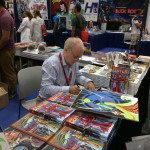 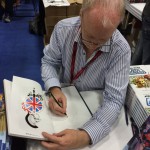 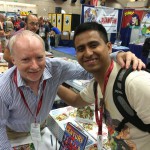 Right next to Top Shelf was the Fantagraphics booth, and I met Don Rosa, the man behind The Life and Times of Uncle Scrooge. I had met Don in 2007, at my first US convention – Super Con San Jose, which has since been rebranded as Big Wow Comic Con, and I mentioned to him how he had signed my copy of Life and Times, but when I went to buy the companion (which is sort of a collection of out-takes from the book), it was all sold out. This time I had a copy of the Companion with me, and he signed it “For Satya, again!” He also sketched a very cool Kid Scrooge for me, with his lucky dime. Very very cool indeed. The Hernandez bros were also signing right next to him, and I got my copy of the Love and Rockets sketchbook signed by both Beto and Xaime. 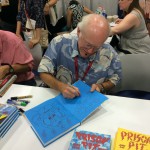 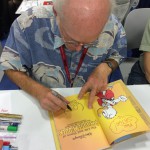 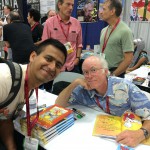 Saturday started off pretty badly, with a parking ticket from the officialdom of San Diego, because half my car was in a yellow line as I was getting money out of an ATM. Mood soured, I went in to try catch Joe Hill. Missed ‘im. Headed to Zander Cannon’s booth, got myself a copy of his audio commentary and he drew me a sketch inside my copy of Heck. Most of the day then went by in a blur, meeting old friends, talking to art dealers, admiring the cosplayers. Made my first payment for my Next Big Art Deal. Ended the day and my con meeting Jeff Smith, who signed copies of Bone for a pal. At this point, I am not sure how many copies of Bone I have asked Jeff to sign, but it’s always a pleasure to say hello to him and Vijaya. 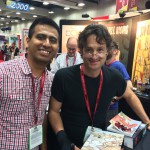 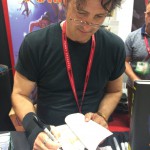 A couple of take-aways for me, from SDCC this year.