A break from your regularly scheduled programming to talk about something that has not been talked about on this blog: shoes. To be more specific, men’s shoes.

I suppose one has to start at the very beginning, and that beginning in this story would be a particular day in my childhood. Picture this: my father and I are faced by a man seated on a wooden stool. The man is a cobbler. We are there because my father decided that instead of going and buying Bata shoes like everyone else we knew, it would make more financial and logical sense to get my school shoes made by the gentleman sitting in front of us. We were there because this was the day I was getting new shoes, and personally, I did not give a damn about the shoes other than the fact that they should be black (school uniform rules) and that they should not hurt.

They hurt. They really hurt.

“Oh, they will stretch out, become looser the more you wear them”, the Destroyer of my Toes exclaimed nonchalantly. “They will fit your feet.” My father seemed to agree, based on his own boundless experience. I would much rather have walked out bare feet, but was convinced by both adults to keep my shoes on. Lucky for me they did not want me to sleep in them too.

In the weeks that followed, the shoes showed no sign of becoming any more comfortable than they were. Eventually, I resigned myself to my fate. I guess my feet gained enough calluses for me to stop wincing every time I walked. But what I took away from this life experience is that: leather shoes are the devil’s shoes. Nobody in their right mind should wear leather shoes. And this was a lesson propagated by everybody else I knew. You wore leather shoes if you did not have a choice. They were either too tight, or too loose –  making your ankles flick up at the wrong moment, forcing you to walk gingerly towards your destination. Nothing felt better than taking them off at the end of the day. Sneakers and sports shoes were what we wore, when we did not wear open-toed sandals. I got adventurous enough to wear sneakers that kind of looked like leather shoes, and sometimes I got away with it.

Until one fine day in 2012, when I was looking at the rows of shoes in the Nordstrom Rack opposite my office and giving myself a bad headache. Because, obviously, I had no idea of how to decide what shoes to buy. Pal Sasi had given me specific instructions: “Don’t buy cheap shoes. You need one pair of formal shoes for special occasions, so make it count”. And I was. I tried on various shoes half-heartedly but just couldn’t stomach the idea of paying a random number between 20$ and (gasp!) 400$ for a pair. Where was the logic? Why would that pair of Kenneth Cole shoes cost a hundred-something dollars and this pair of Rockports be 30$, even though they look exactly the same? It couldn’t all be about labels and stickers, right?

The gist of what I learnt was that good shoes matter. And that good shoes uniformly cost money. But in return, good shoes also last longer – much, much longer. In my mind, two years for a pair of shoes was pushing it; there were the occasional shoes that made it to Year 3, but even I realized that I was doing myself no favors by letting my feet be encrusted with a bedraggled mess. What the Internet promised was mind-boggling – apparently some shoes would even last upwards of 20 years. Over time, I would learn about the difference between terms like Oxfords, Wingtips, Brogues and Cap-toes, about lasts and welts; about shell cordovan vs calfskin, the difference between leather and rubber soles, and the perceived formality of a shoe. Guides like this helped, as did a bunch of Reddit forums.

Obviously, the prices quoted were sometimes ridiculous – you could pay thousands of dollars for a great pair, but it wasn’t necessary to do so – there were other factors at play. Fortuitously, a book called Deluxe came into my life at around the same time, and it talked about brands and fashion and the intersection of economics and utility, and I was starting to take a look at the utilitarian things that I owned in a new light. I looked at names of shoe companies that were talked about on forums. A name that appeared frequently in such circles was an American company named Allen Edmonds, based out of Wisconsin. They had provided shoes for the US military, the Olympic team and were the shoemakers for multiple American presidents. And in an age when manufacturing was moving to China, it transpired that Allen Edmonds shoes were being exported there.

So I went over to Nordstrom Rack again and tried on a pair of AE McAllisters that was on sale. A great Merlot wingtip (a younger version of me would have used the term reddish-brown, but I was aware by then about the different kinds of reddish brown – oxblood, merlot, bourbon or chili), for sale at lower than official price. To say that it felt good was an understatement – it fit my feet like nothing before. It was not too loose, not too tight; most importantly, I wanted to keep them on. I tried other shoes that same day –  some felt lighter, some were tight around the toes or the sides, others just did not look right. It took me another week before I could sufficiently convince myself to take the plunge though – they were definitely pricier than my mental limit, but I realized that I wanted those shoes when I walked into the Rack and found myself getting panicky when they weren’t at their usual place.

I did go on to buy more from Allen Edmonds, and I have had uniformly good experiences with them. People comment on why I am wearing leather shoes instead of more comfortable ones, and I find it hard to explain that no, these are really comfortable shoes, even after a day of keeping them on my feet. Also, the inner soles are set over a layer of cork and over time, they seem to have molded to the shape of my feet, which make them uniquely my shoes. It pays to take care of them, and I find it therapeutic, much like folding laundry or ironing shirts, to sit in a corner and polish them while watching something. I have tried other shoes every now and then – especially being interested in some British companies like Barkers or Crockett and Jones. (It was a revelation finding out that Northampton in the UK was the center of the men’s shoe-making world. I had known that place to be the center of the universe for another reason altogether)

That would have been the end of this story, except:

In February, while in Sheffield, I came back home one evening and something felt off. I had been wearing the same McAllisters from 2012, and my feet felt a little damp and – tired. I thought it was because I had been walking through cobblestones in the rain, but a closer look and I realized what was going on: there was a nasty hole in the right sole. A small one, but very clear indeed; I could see the cork underneath clearly. Water had seeped in. “That’s it”, I thought. “End of the road for a great pair.” But I figured I could always try recrafting them – that’s a service that AE offers at a price, and so I sent an email to their customer service asking them whether I should go see a cobbler myself or send it over to them. I got a reply 2 working days later, where the lady asked me not to do anything until I was back in the States, and then to contact them again. A week later, when I emailed them again from Los Angeles, they sent me a shipping label – all I had to do was put my shoes in a box and drop the box (with label) at a UPS center.

Another week later, I got an email from customer service.

Thank you for sending in your shoes.  We apologize for any inconvenience that you may have experienced with the footwear.
We would like to recraft the footwear for you at no charge.  The recraft would include new soles, heels and refinish the leather uppers.

If you would like us to proceed please let me know.

I will admit to being caught off-guard by this. I mean, it had been three years since I bought the pair of shoes! They could very well have just charged me for the recrafting. I don’t know about you, but I found this kind of customer service bewilderingly awesome. It took 10 working days for the shoes to get back to me. They look like new and feel just they used to. 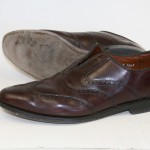 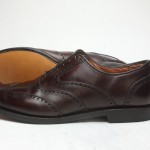 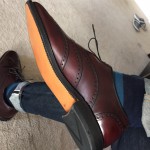 And it is clear that they put in a phenomenal amount of work into the whole recrafting process.

I had never really looked at my shoes as an investment, but I realize now that they might very well be. AE claims that their shoes can be recrafted up to 5 times – one may ask why you would want the same old shoes for years and years, instead of picking a new pair every few years, but that leads to deeper philosophical discussions about materialism and chemical footprints and what-not. But the basis of all discussions about men’s fashion seems to be that certain things are timeless in terms of look and utility – formal shoes are among them, as are grey woolen suits, navy wool blazers and white shirts. Above all, it is important to recognize craftsmanship, value for money and customer service. Allen Edmonds seems to have the perfect blend of these three qualities – and they deserve to get my money.