The renowned American designer Charles Eames and his wife Ray Eames were once asked by the premier politician of a friendly country to evaluate the effect of Western technology, specifically design, on their culture. There was also the question of how the fledgling state could benefit from the Eames’s input.

The Eameses, true to their mode of working, went all in. In their report, submitted one year later, they went to great lengths to explain how true design is intuitive and yet evolutionary. As an example, Charles talked about the thinking that might go into designing a simple vessel that one might use to carry water.

The country in question is India, of course, and this object under consideration is a lota, that traditional metal water vessel used across the subcontinent. In their report, they wrote:

Of all the objects we have seen and admired during our visit to India, the Lota, that simple vessel of everyday use, stands out as perhaps the greatest, the most beautiful. The Eames Report was submitted to Pt Nehru and his cabinet in 1958, and in 1961, the National Institute of Design was founded in Ahmedabad, as an autonomous institute devoted to research, service and training in industrial design and visual communication. It now has five campuses across India, and is still going strong.

An interest in mid-century design had me reading about the Eames’ lives, specifically via the book The Eames Primer, written by Eames Demetrios, one of Ray and Charles’ grandchildren. The India episode came up as I flipped through the pages at a bookstore, and made me realize I had no idea that the couple were that closely entwined with the history of modern Indian design, specifically with NID, even though I have known and even worked with friends who were graduates from the institute.

While I did think of getting a classic Eames recliner when it showed up in Costco, of all places, the Herman Miller price-tag is a little too daunting for me at the moment. Seriously, if it is a toss-up between a chair and an entry-level Sandman page, you know I would pick the page.

But I could not resist picking up a knock-off Eames recliner from a local vintage furniture shop earlier this year. Turns out there were a lot of customers gnashing their teeth between the time I paid and the chair got delivered home. 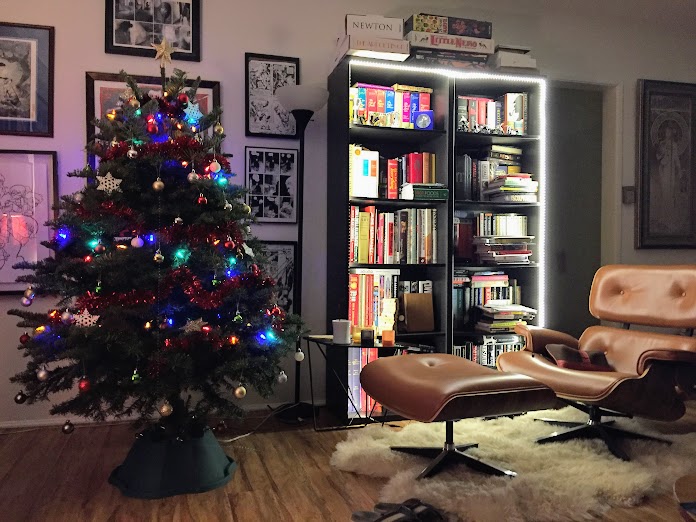