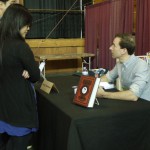 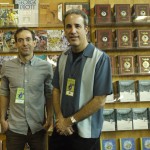 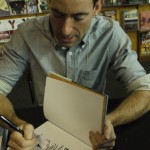 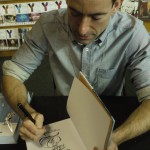 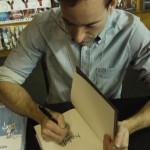 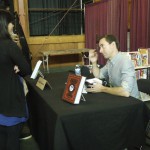 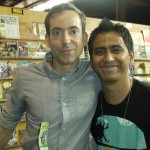 Ab Tak Chhappan: The Soundtrack has crawled into my mind, and now refuses to check out.

“We wanted to capture the staccato mood of the film and in the process ended up using unconventional instruments like the sitar, to chill the audiences. The music overall is a blend of Atmospheric world music with psycho rhythms featuring the Armenian Duduk and Sarangi singing a duet together.” – the cd inlay cover says, and features a photograph of the composers, grinning away to glory.

If you look at it as a whole, ATC is highly skewed. The main theme, the short riff that I sung at the beginning, pops up throughout the soundtrack, and it is good enough to overwhelm the rest of the tracks. It serves as a very good reminder for the mood of the movie – crisp, brisk, with just the hint of on-the-edge feeling. But, ah – the combination of Niladri Kumar’s sitar, Naveen’s flute, Shekhar’s cello, and the composers ( I presume!) on the piano proves its finesse on the concluding track ( “Sadhu Agashe”), and track eleven – “Nirvana” comes a close second. “Run Sadhu Run” is the only track that comes close to chaotic orchestration, but I guess the situation it. One of the main personal gripes against the soundtrack when I heard it in the theater was that it was too in-your-face, and loud, but listening to the cd does not make it seem as cringeworthy as I thought it would get.

All in all, worth listening to, even if you insist on ignoring all the bits other than “bamp babump etc”, which plays at all keypoints, on different instruments, ranging from the lower keys of the piano to vibraphones, slap bass, and the cello.

I read the first volume of Katsuhiro Otomo’s Akira today, the limited edition colour version that now costs a fortune ( 200$ for volume 3, last time I checked in Mile High Comics ) The book I read has “This is number 1247 of a limited edition of 2500 copies” inscribed on it, which is kind of awe-inspiring. Except of course, the copy I was reading was a digital version. Bless the guy who scanned in the 176 pages of his book.

Otomo-san, as I have repeatedly stated before, does not disappoint. The book is surprisingly unfaithful to the movie, which is rather unexpected ( he wrote the damn book! And he drew and directed the movie too), and also expected (after all, when does a movie stick to the book?) but what is strange is – the movie actually goes into more detail than the book, so far. The beginning of the book is somewhat abrupt, and the relationship between Tetsuo and Kaneda ( one looking upto the other, with a faint sense of resentment, and the other being an elder-brotherly figure), so nicely slotted in the first five minutes of the film, have yet to develop in the book.

The artwork is stunning, and the colour (by Steve Oliff) fits the dystopian look of Nu-Tokyo to the hilt. I am kind of worried, because someday I will be buying Akira, and I do not want to feel lost if I buy the Black and white versions. Otomo-san excels in scenes of mass-destruction – the level of detail has to be seen to be believed. Thank you, brainz, for getting me this ( and the Lone Wolf volume, and the Hellblazer series, and the Elektra collection, and ….wait, I need to catch my breath. )

Enough blabbering. I have a mild headache, which I am worried will mutate into something huge and of planet-shaking proportions if I loiter around the Internet too much.

But I (ahem!) forgot to say that Bjork’s latest album Medulla, which was released two days ago in the United States, and which has been residing in my hard disk for the past two weeks, is an experiment worthy of hosannas. The lady decided to have her album with voices alone, and no instruments. While some tracks ( Show me Forgiveness, Oll Virtan, Desired Constellation) are straight-out acapella songs, some (Pleasure is All Mine, Who Am I) are experimental, with voice-samples used as bass-tracks and layered to produce outrageous sounds; some (Oceania, Miðvikudags) are downright creepy!!! What am I saying? ALL of them are creepy – that’s why I listen to Bjork in the first place.

Note: I promise to buy this album as soon as I find it here. Feel rather guilty downloading it before it’s release date. I didn’t know it hadn’t been released yet, swear.

Sasi was a little depressed yesterday. So we went to Basheerbagh and he bought eleven DVDs. I bought four.