For those who came in late, Nihilanth is an inter-IIT-IIM quiz festival that is held every once in a while. It’s technically supposed to be organized on an annual basis, but that does not happen. It is held at a random IIT or an IIM, the choice of institute being decided by the sudden death of two randomly selected quizzers from every institute on a deserted island, or so I hear.

My association with this festival goes back to the very first time it was organized – brace yourselves, young ‘uns, it was way back in 2003. NINE YEARS, holy moley! I was 23, about to turn 24, and the only quizzes I had conducted so far were in my own college, and in a local Warangal school, where the kids really enjoyed the impromptu Harry Potter round. Except the ones that had not read Harry Potter by then, the little losers. Well anyway, what happened was that we had organized a quiz festival (called Trivium) in our college a few years ago, and I did the music and movie quiz. A bunch of students from REC Surathkal were in attendance, and proceeded to make a killing at the events. They won nearly every quiz, and were kind enough to take us quiz-masters out for dinner as well with their hard-earned prize money. One of them happened to go to IIM Indore a few years later, and it was him – Suryakrishna Tamada Tatineni, ‘Suki’ for short, who had the bright idea of organizing an inter-IIT-IIM event. And the brighter idea of inviting me to conduct the Entertainment quiz.

Somewhere down the line, people seem to have come to the conclusion that I was responsible for naming the aforementioned quiz the ‘MELA’, short for Music(or Movies) Entertainment Literature and Arts, thereby starting the tradition of referring to every entertainment quiz by that name. People are wrong. Personally I thought the name is a ghastly one and I have no idea who coined it. But for better or worse, it has stuck, and I suppose it does not really sound that bad now.

I wasn’t paid much for my services. But that did not matter, I was over the moon at being invited. Why? Because the General quiz was being conducted by a certain Siddharth Basu. I was going to conduct a quiz with – okay, technically just at the same venue, but still – the guy who got a majority of college students in India addicted to quizzing. Yes, this was a Fucking Big Deal indeed. I found out later that the man was paid a 100 times my fee. Heh, now that was a Big Deal.

But screw that. A lot of things came about thanks to that quiz. It jump-started my alternative career as Quizmaster for college festivals around India – which in turn nourished finances for my fledgling comic art collection. The spurt in invites happened primarily because the people who attended the MELA liked it a lot, and when they needed a quiz-master for their college fests, they gave me a chance. Gaurav Sabnis was there. I remember his college contingent being a little late to my quiz, because of which I had go through my prelims again. He had very kind things to say about it – little wonder then that the second quiz I conducted was in IIM Lucknow the next year. Arnav Sinha was in IIT Delhi, and was one of the reasons I was the first QM they locked on when Nihilanth happened there the second time, a few years later. This was also the first time I met Shamanth and Siddharth (who, as I realized recently, keeps popping into the blog every now and then – hi again, Bofi!) They did not make it to the finals of my quiz, but kicked ass in all the others. Fellow Hyderabad-quizzers Dhaaji and Anil were in attendance too – Anil could not participate that year, but Dhaaji did, as a solo IIM Bangalore representative if I remember correctly. I believe I lost all chances of doing a quiz at IIM Bangalore because one of my questions involved identifying the Beatles, from a demo of  ‘Strawberry Fields’, and that pissed him off beyond belief. Sheesh. I wish I have an excuse, but I don’t. What the hell was I thinking?

It was not entirely by coincidence that I ended up in the same taxi as my fellow-Quizmaster doing the Science and Sports quizzes at the event. We were housed in adjacent rooms at the Hotel Sayaji Grande after all, and over genial breakfast conversation on Saturday, we learnt of common interests. Phone numbers, as well as trivia about Richmal Crompton and Tintin comics were exchanged. We promised to stay in touch, more so because he tantalized me with news about how a friend from the USA had gotten him six CDs full of digital comics. I had heard of Arul Mani before, but that was the first time I met the Good Doctor. Neither his magnificent whiskers nor his patented Thigh Grab were on display that day, but it was an auspicious start to a long and lesbian-vampire-enriched relationship. Meeting Arul was also how I found myself in Daly Memorial Hall one fine Sunday that year, asking questions about Malini Iyer, HP Lovecraft and Artemis Fowl to a mostly-befuddled audience of Karnataka Quiz Association members.

So why am I talking about this today? Because of my books, surprisingly. You see, all my books just arrived yesterday from India, and are currently taking up a bulk of my apartment-space. I have been halfheartedly opening up some of them this evening, trying not to hyperventilate in the process. And I came across a bunch of pictures. Most of them were taken by a helpful student on my camera (trivia: the camera was part of my winnings at the Saarang 2001 Main Quiz at IIT Madras). Yes, it was a film camera, and yes, the photographs are mostly crap. But still, a hearty steaming slice of nostalgia. 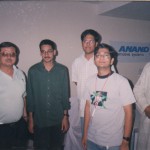 Gautam Ghosh on the left, Anil in the middle and Arul on the right. I do not remember who the others are. 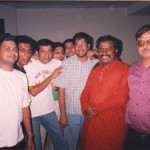 The quizmasters gather. Arul looks very pleased. He is probably thinking of growing a beard. 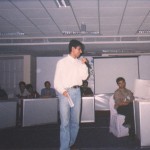 No powerpoint slides. Questions on printouts. I was teh Hard-core. 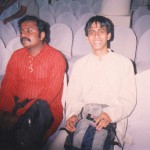 One of the two people in this photograph is bored out of his skull. 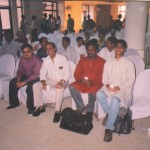 Gautam Ghosh. Siddharth Basu. A somnolent Arul Mani. And me. 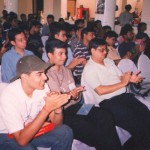 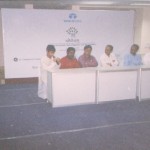 Ooh, I have the mic in my hands. My palms are sweaty. Arul Mani does not give a damn. 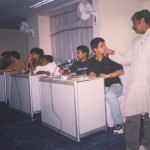 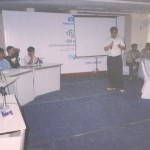 I have run out of smart-alecky captions. 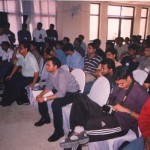 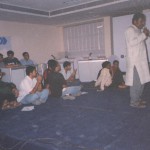 The Science and Technology quiz. 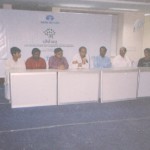 Siddharth Basu talking. One person at the table is Extremely Excited.

This year’s Nihilanth was held at IIM Lucknow a few days ago, and it was the first in which I did not conduct a single quiz. On the plus side, I go to watch Porco Rosso in the Egyptian theater tomorrow.