I love e-books and e-readers.

With that out of the way, I also love physical books. Not in the ‘real books smell awesome!’ kind of buzzfeed-happy hippy activism that seems to be going around nowadays, nope. I would prefer that the physical version of a book be something that brings its personality to life. It would have to be the kind of entity that needs to be on a shelf, as an extension of my own love for the contents of the book itself. A volume that feels good to possess, re-read and show off.  Paperbacks do not quite cut it, and I find that given a choice between an ebook and a paperback, I would prefer the former – just to avoid clutter. But if it is a book I love, and if there is an edition that screams at me to buy it, that’s when the wallet comes out. (he said, taking his pipe out of his mouth and with a sip of his chardonnay)

Subterranean Press is a small-press publisher from Michigan that publishes limited edition printings of (mostly) fantasy and science fiction titles. These are copies that come designed with a lot of care and attention, and the lettered editions in particular set enviable standards. Of course, the prices reflect both the exclusivity and the attention that the publishers lavish upon these books. Which tends to limit my spending quite a bit, not a bad thing at all. They are not the only ones doing this – there’s a whole other bunch of publishers such as Cemetery Dance, Centipede Press, and PS Publishing that do nearly the same thing. Here’s a site where you can read more about these editions. But it is SubPress that I have a special fondness for, and not without good reason.

For one, this company has been publishing the works of Joe Hill, one of my favorite authors at the moment. My first purchases with them were editions of Horns, and the first two volumes of Locke and Key. Horns was a beautifully slip-cased “trade” edition, because the limited eds had sold out by then, and I got it signed by Hill at a Wonder Con 2012, soon after. The two Locke and Key volumes came with the scripts, just the second example I have seen of comic-scripts being bundled with the comics themselves, the other being the first two Absolute volumes of The League of Extraordinary Gentlemen. I have been meaning to get the limited edition of Hill’s first book – Heart-Shaped Box, but the crazy eBay prices deter me. Last year, when NOS4A2, Hill’s vampire opus was due to be released, I kept a close eye on the SubPress release, meaning to buy it as soon as the pre-orders went up. Alas,. I was traveling outside the country, and by the time I was back, all 750 copies were gone. When the books finally shipped, after-market prices went through the roof. I could only gnash my teeth as copies sold for upwards of 300$, on a cover price of 125$. I did keep a close eye on eBay auctions and the occasional sane market-place dealer (Bett’s Books, for example. One of my favorite booksellers because their prices are pretty reasonable, specifically for Stephen King limited eds. But even they did not have a SubPress copy of NOS4A2 under 200$) Nope, nada, zilch.

Until last week, when I happened to check the SubPress newsletter just as it came in. And this is what it said: (under the heading A Surprise)

Needless to say, before you could say “SHAZAM!”, I jumped on the page. With the speed of Mercury, I entered my credit card details and clicked on the BUY button with the power of Zeus. It took the courage of Achilles after the transaction failed the first time, to realize that it was not because the 22 copies were sold out, but I had entered the wrong expiration date on my card. The wisdom of Solomon came to my rescue, and I repeated my exercise. Boom, tish!

A few days later, the glorious package landed up on my doorstep. It does require a bit of the strength of Hercules to pick the oversized volume, and I am saving the stamina of Atlas for when I re-read it. I have to, the book has an alternate ending and a novella that comes with it, and by golly, I love it enough to reread it. Also, while the other SubPress Hill books were illustrated by Vincent Chong, the illustrations in NOS4A2 are  by Gabriel Rodriguez, Hill’s collaborator and co-creator of Locke and Key. Rodriguez not only designs the lurid cover, but also a bunch of full-color character illustration bookplates scattered throughout the book, and black-and-white chapter illustrations. Icing on the fucking cake, man. 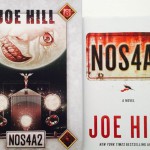 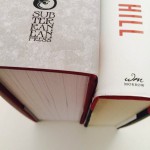 Because size does matter! 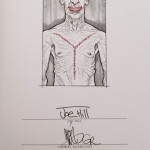 Oh yeah, it’s signed by both Hill and Rodriguez 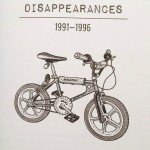 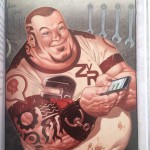 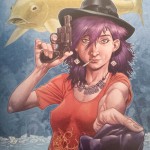 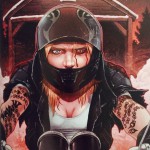 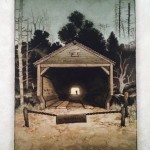