Remember the time we did not own cellphones and were still able to coordinate times and places at which to meet people?

I don’t, either. It’s terrifying when you are not connected to any phone network and are supposed to meet someone. Especially at an airport. Even though you know the flight number and the time of arrival, there’s always this worry that you’re standing at the wrong spot and and the people you’re waiting for have arrived already and are looking for you elsewhere and you are doomed to miss each other until one of you has the bright idea of going to an internet cafe and sending an email saying exactly where they are.

Ah, technology, you make frightened little gerbils of us all.

But nothing like that happened when I went to pick my friends up at Barcelona airport on Friday night. They were supposed to arrive at 9 PM, and I landed up there much earlier, had a coffee, read a bit of Hunger Games. And waited. And felt panicky when they did not come out by 9:15. Asked a lady standing next to me if she was waiting for the same flight. She was. I asked her if she was sure this was the gate. It was. I was about to ask her if she was doubly sure, but she grabbed my shoulders and asked me to relax, because she was waiting for the same flight. I did, and took a deep breath. Of course the conversation would have gone a little less surreal if we had been speaking the same language – she was speaking Spanish, then switched to Romanian, and then tried broken English. I oscillated between English and sign language.  It worked like a charm.

And then they were there, and there was much happiness and the occasional arm-punching. Thanks to my new-found knowledge of the Barcelona subway system, the four of us were considerably less agitated than I was in the day by the time we reached the hostel, also because they were travelling with sensible amounts of luggage. We rested for a bit, and then headed back toward La Rambla, debating what should be done for the night – Cristi insisted we go bunzi bunzi (a phrase that, when coupled with a flick of the wrist and the eyebrow, conveys just the right amount of eagerness to go shake a leg at the local nightclub) but Laura and Gabi wanted to get touristy, preferably near the beach. We decided to postpone the decision until after dinner.

La Rambla spoils you in terms of culinary choice. We window-shopped through the numerous restaurants looking at menus and prices, the availability of sangria being a major criteria. The place we selected had an Indian-looking waiter serving us – turned out he was from Pakistan, and he alerted me to the fact that Barcelona had a profusion of Pakistanis, compared to Indians. (Sure enough, we met a lot of them later that night on the streets, almost all of them selling beer and weed to tourists.) We ordered a bunch of tapas, a liter of sangria that came in a clay jug, with four multicolored straws and two portions of paella. By the time we were done with the tapas, it was clear that we could not finish the paella, but we persevered. Laura poked suspiciously at what appeared to be mushrooms but turned out to be calamari. (It did not help that I insisted it was mushrooms until the waiter clarified that it was indeed calamari) There were moments of hesitation at the mussels and the shrimps; but all in all, a most successful inaugural dinner.

Both Cristi and Laura had been in Barcelona before, while Gabi and I were newcomers. The two of them took the lead and suggested that we head towards the beach, which was a not-too-short not-too-long distance away from where we were. As we walked down La Rambla, the air smelled of marijuana and cigarette smoke. Every nightclub in town seemed eager to welcome us inside, delicately-painted women and swaggering men armed with flyers and discount coupons proclaiming how much fun we would have. We valiantly sidestepped them and marched ahead. And launched into intense technical discussions – haha, as if. We laughed, and talked, and made silly jokes at the expense of the peaceful bronze lions at the Monumento a Colón (literally, the Columbus monument, a tall monument that marks the place where Christopher Columbus returned after his first voyage to the Americas). There are incriminating photographs of Gabi involved, but they will not be made public.

And finally, we got to the beach, which was completely deserted, and cold as fuck. One man sat by himself, contentedly staring at the roaring waves. We walked around the sand a bit, until the other three were emboldened by the Indian guy taking off his shoes and wading into the water. We went nuts. The sea was freezing at first but it wasn’t hard to get used to the cold. Though photographic evidence proves that Cristi was especially perturbed with the state of affairs, especially when he found out that the sand was colder than the sea! Laura did her sea-maiden thing – heading out by herself into the waves, while we whooped and hollered and did what seaside-deprived individuals do.

It is a truth universally acknowledged that a dip in ice-cold water, followed by a sprint across cold sand while holding your shoes in hand is bound to evoke strong feelings of homesickness, coupled with a marked distaste for long walks of any kind. We took a cab as soon as we could.

Our cab driver, as the law of averages suggested, was a talkative fellow. He got all the more loquacious once he realized that the pretty blonde girl sitting in the backseat knew Spanish and the hapless, semi-frozen Indian guy in the front did not. Oh well, at least the ride back was entertaining.

I landed at Barcelona airport on a Friday morning, with a tingling feeling in my tummy. Excitement – because I was going to have an awesome time. Mixed with trepidation – what if it rained? What if I got ripped off by cab-drivers? And a bit of semi-happiness seeing a random guy reading a copy of El Jueves. Most of the worries were taken care of in the first few minutes. It was a sunny day and according to the Information Kiosk at the airport, the path to my hotel was straightforward, involving a bus ride, a train ride and a short walk. I hadn’t reckoned with my luggage and the subway system in Barcelona. You see, I was carrying contraband of a graphic nature. Among other things, the one-volume twentieth-anniversary edition of Bone, a monstrosity of a volume that threatened to unplug my shoulders after a few meters of walking around the subway station at Plaça de Catalunya. Add to it the fact that the station was arranged across a horizontal spread, with multiple routes. It took me some time to find my correct line. It would have been a breeze without the luggage, but add the weight and the slightly air-conditioner-deprived underground, and I was rattling like a dehydrated marmoset. My stop was two stations away, and when I was out, I was like – fuck it, I can’t walk anymore. So I got a cab. Good thing I did too. Because pal Horacio, who came by the hostel for lunch, was about to leave after hanging around for some time. We met just as he was coming out. Pleasantries and Hellboy pages were exchanged – well, I gave him the page I was transporting for him. Horacio and i hit up a Catalan place for a late lunch near La Rambla, the tourist hub of the city. On the way, he showed me the Barcelona cathedral, pointed out the MACBA, the Barcelona museum of Contemporary Art – and most importantly, the comic-book shop he frequents in the area. It was closed, but the posters of Los Muertes Viventos (that’s the Spanish version of The Walking Dead, amigos) on the display window made me grin. Horacio left just before dark, because he had to take his son out to football and running late. (“my wife has run away with another man, Satya”, he remarked sadly, as his fifth phone call went unanswered, and then both of us burst out laughing. ) I decided to head back toward Catalunya again, because I had to pick up my friends from the airport – they were flying in from Cluj to spend the weekend with me. The Plaça was lit up brightly. People everywhere, sitting on benches, outside cafes, some even singing. It felt good. I sat down near the fountain, a little away from the crowd, breathing in and watching winter smoke swim out of my mouth – something that never fails to amuse. A young girl next to me, reading and smoking, turned out to be a veterinary student in her second year. She put her book down to talk, finished her cigarette, and then offered me some oranges. We looked at the fountain for a bit, and she told me how she loved and hated the crowds at the same time, how this time of evening for her was special because she could read in peace. She asked me to look her up anytime I am back. “How will I find you?”, I asked. “I am always here in the evenings”, she laughed. 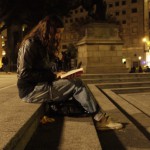 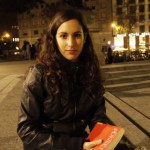 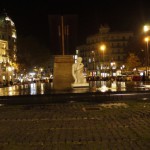 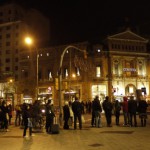 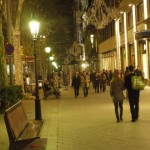 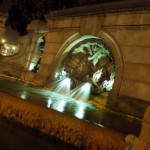