We walked down Las Vegas Boulevard on our last afternoon there, taking in the daytime sights of that crazy, insomnia-riddled city. A man stood in the shade with a live python on a table in front of him. For a minute, I was tempted to test the remains of my ophiophobia. But I looked more closely at the snake, and it looked forlorn, more than a little harmless and very disturbed by the hubbub around it. I felt sorry for it, and the moment passed. We walked on, and it was totally not because I was chicken.

There was a flock of Latino Elvis lookalikes, who made me think of 3000 Miles To Graceland and True Romance and Bubba Ho-tep, and the troops of dwarf Elvises that went around humming “Hunka hunka burnin’ love” in Grand Theft Auto 2. Elvis impersonators are inherently funny, and driving over miniature versions who screamed and scattered and then died with satisfying crunches used to be one of those fulfilling activities of youth.

We found ourselves in front of the Bellagio, where the fountains soar and crackle with cannonball thunder every thirty minutes. We watched, took pictures, laughed and clapped, as did everyone around us. A street-side artist waved at people passing by. He had a somewhat odd-looking caricature of a woman open in front of him, with her hair drawn across her lips, that made her look like she had a moustache. The three of us looked at each other and realized that we wanted to get ourselves drawn. At which Steve (for that was his name), Steve-with-a-smile took his sketchbook and spent the next ten minutes doing what he did best, and boy was it purty. He did not use pencils at all, just markers, and the deftness with which he put our likenesses to paper – standing all the while, smile intact – was amazing. “Markers fade”, the art collector in me whispered. “Shut up and have fun”, I whispered right back. “Everything fades.”

I found Vegas more than a little claustrophobic. Navigating through slot machine farms soaked in cigarette smoke and neon lights gets tiresome after a while. The only time I sat at one of them was when a friend wanted to smoke and there was nowhere else to sit, so we grabbed two beers and occupied two bar-stools next to a machine. This one time we wanted to have coffee, it was difficult to navigate to a Starbucks – Google maps said that the closest counter was somewhere inside a building, but plodding through miles of slot-machine farms was daunting. We found it finally, squeezed behind a lounge and a bar.

But Vegas at night is truly something. It was fun being there with friends who had traveled across continents – two of them refused to fall asleep until morning every day. We hung out, did silly things that you can do in the city without a second thought, picked up every card and flyer for escorts and adult shows that were being distributed on the streets by random strangers. I could talk about my Onizuka moment, sitting in the bar at the Cosmopolitan that night, when the girl sitting next to me pointed out that the glass elevator that went up periodically allowed us to peek up the very short skirts that the ladies seemed to be wearing. I remember falling asleep on my feet at about 4 AM, in a Walgreen’s. Two of us walked outside while the others still shopped, where the cold air and the ice-cream we shared sort of woke us up, and we saw a bunch of couples dancing to a guitar-player who strummed his instrument like someone skinning a chicken.

I nearly made it to an ATB concert on Saturday night, but a series of unfortunate events (that will remain unmentioned on the blog) transpired, and we found ourselves watching Russell Peters videos in our hotel room at 2 in the morning. Which totally rocked, just so you know. 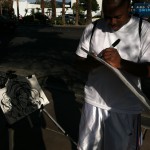 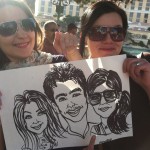 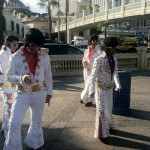 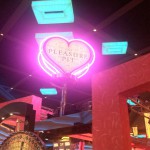