Obviously, not PG Wodehouse himself, but a stage adaptation of his work.

I am in Sheffield at the moment, and before I was about to come here, L told me that she had seen a musical called Anything Goes playing at the local theater, and it was a lot of fun. The name rang a bell, and indeed, the musical was penned by the same person who made a whole lot of us quiver with silent laughter in our seats through the antics of Galahad Threepwood and Bertie Wooster.

However, it was due to depart from Sheffield before my arrival. No harm done, I figured, but curiosity played a role in my googling for “Wodehouse play sheffield”, and I happened to chance on:

A stage adaptation of Perfect Nonsense, playing in Sheffield the very week I was due to be here. Not only was this a Jeeves and Wooster story starring Roderick Spode and Aunt Dahlia and a silver cow creamer, but it was also very critically acclaimed, having won a bunch of awards in the UK. It starred one of the guys from the TV show Peepshow – a show I confess I cannot watch more than two episodes of without squirming in embarrassment for the characters and the situations they put themselves in, which is another way of saying that it’s brilliant. 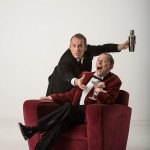 Happiness and squee ensued, until:

My trip had to be delayed by a week, because of passport-related nonsense. Long story short, the USPS played pass-the-parcel with my passport, which the UK consulate at New York had sent via one-day priority express (not out of altruism, but because I had paid for the damn return label out of my own pocket). As a result, the parcel, due to arrive on January 24th, made its way to Memphis, Tennessee, sauntered around a bit taking in the sights, I presume, and then mysteriously reappeared in Los Angeles on the morning of the 29th. My flight was at 8:30 in the evening, and I swallowed a couple of optimista pills, and threw looks of longing at passing vans that would make piano-playing jilted lovers from seventies Bollywood want to hire me as their emoting coach. Alas, close of business came and went, and after having cancelled my ticket – sweetly enough, Orbitz charged me a 100$ only for the cancellation, and issued a full refund for the rest – I made my way to our office rec room where a party was in progress, and proceeded to drink myself silly. No, just kidding, I did imbibe, but just enough to drown my feeling of frustration. At that point, there was nothing I could do but wait.

The passport got in on the morning of February 2, and I was off on February 3.

As it turned out, I arrived in London the weekend the play was closing down in Sheffield, so there was no way I could see it there. But:

The next city in the tour was Harrogate, which was not too far. About 2 hours by train, and we could have probably made it to one of the 7:30 PM shows, and yet:

The week was a little crazy, because I was working remotely, and had daily status meetings with my US team at 6:45 PM GMT.  So there was no way we could go watch the play on a weekday. So Saturday the 28th, 7:30 PM, was the only day and time that we could possibly make it to the show. And it was – bam tish! – sold out.

Oh well, we said. Some other time. We decided to go and visit Cambridge over the weekend and maybe York, and see a bit of the countryside. But then we looked at train tickets, and after some calculations, I figured that it makes much more sense to check out car rentals instead. I had tried some half-hearted searching a few weeks ago, but the thought of driving on the left side of the road, and the general unfamiliarity with the English spirit of driving – in my head, people driving in Britain were either sweet old couples who would get panicky at the slightest sign of the inability to follow driving rules, or aggressive football fans who would yell racial epithets at me. And yes, that sounds pretty racist of me, but you have to understand that it’s pretty hard to de-condition oneself of years and years of pop cultural brainwashing.

As it turned out, the rental proved to be much cheaper than the train tickets, and it took a few minutes of blinking my eyes and frowning at the road to understand that it wasn’t that bad to drive on the left side again (It had taken me nearly a year to stop waiting for buses on the wrong side of the road, when I moved to Los Angeles). Now that we had a car, it seemed like a better idea to go to a wildlife preserve instead, specifically the one at Spurn, which was a peninsula that jutted into the sea on the East coast of England. Driving along the M18 was a breeze, and we entered the town of Goole and stopped to get some gas in, when:

I checked the theater listing in Harrogate once more, and saw that:

It felt stupid to not try to make it to the show, and since L did not explode with fury – she was really sweet about it, actually – I pointed my car in the direction of Harrogate, and set off with a pace that I would describe as not-quite-pedal-to-the-metal-but-almost.

We reached Harrogate at 1:27 PM. The parking lot for the theater said “FULL”. It was raining with the kind of torrential gusto that provokes doomsday prophets to look you in the eye with an “I told you so” expression. After circling around the block for 5 agonizing minutes, I managed to back into a street parking space in front of a mall. It was a pay-and-park space, with a time limit of 40 minutes. “Let’s go”, I said. “There is no point, the show must have begun already, and we are too late.” L, more than a little drenched and exasperated, insisted on walking to the theater to see if there were 7:30 tickets at least. Worst case, she said, we could grab some lunch here.

We began walking to the theater. And walked about 5 minutes before realizing we were walking in the wrong direction, huzzah.

As we entered the theater, the ladies at the box office looked up at us from their lunch. We could hear the audience laughing through the closed doors.

“The show’s already begun”, one of them said. “But if you do not mind sitting in the balcony, you can go right in.”

As it turned out, we finally made it to the show, about five minutes too late. Wooster was still in his apartment talking to Jeeves about the state of affairs that has led him to commit to visit Gussie Fink-Nottle at Totleigh Towers, and shortly after, Aunt Dahlia burst in complaining about Sir Watkyn Bassett’s attempts to woo away her chef (whose name escapes me at the moment). The show’s half-time matched perfectly with the time of expiration of our street parking spot, and the twenty minute gap was just enough for me to saunter over to the car (it had stopped raining by then), note that Jubilee Car Park now had free spaces, and to move the car inside. I made it back to the theater with enough time to spare to hit the restroom and the bar.

The play was magnificent, with the same two actors playing multiple roles – yes, Jason Thorpe played Jeeves, Gussie Fink-Nottle, Sir Watkyn Bassett and Madeleine Basset, while Christopher Ryan plays Seppings, Aunt Dahlia, a 9-foot tall Roderick Spode and Constable Oates. Robert Webb plays Bertie Wooster, of course, and the play takes madcap comedy to delicious extremes, with the fourth wall not being broken so much as pulverized. The self-aware nature of the proceedings appealed to me a lot, even as the actors played around with a minimal stage setup with enthusiasm. It was full of unbridled Wodehousian joy, the play was.

We spent the rest of the evening in Harrogate. There was a Thai restaurant next door called Sukho Thai, and it turned out to have the best Tom Kha soup I had tasted in a long long time. The pre-theater menu also included a main course of duck cooked in coconut, tomato and pineapple, and subhanallah, calling it “good” or trying to describe it in mere words would be an insult, so let’s just leave it at that.